Well, I decided that I would love to create some raised garden beds.   A few years ago we dug a vegetable garden in the ground in a different area, and it had its problems. The garden did not do well at all.

In seeing these raised garden beds on Pinterest and how simple they look to construct, I decided to go for it.

The small area that I planned on using as the spot for the raised garden beds was formerly a pond area.   After we bought the property, I didn't like maintaining this and I would always find poor little baby birds which had fallen from their nests in the small trees and shrubs above the pond, meet a watery death as they had drowned in the pond below.  I felt so bad about this!

Add to this conundrum was the fact that there was a fountain for this pond. The underwater pump would always be clogged with leaves and such. The pond by itself probably would have been fine without all the small trees and shrubs planted around it.   It just didn't work well.  I don't know what the former owners were thinking when they installed this! 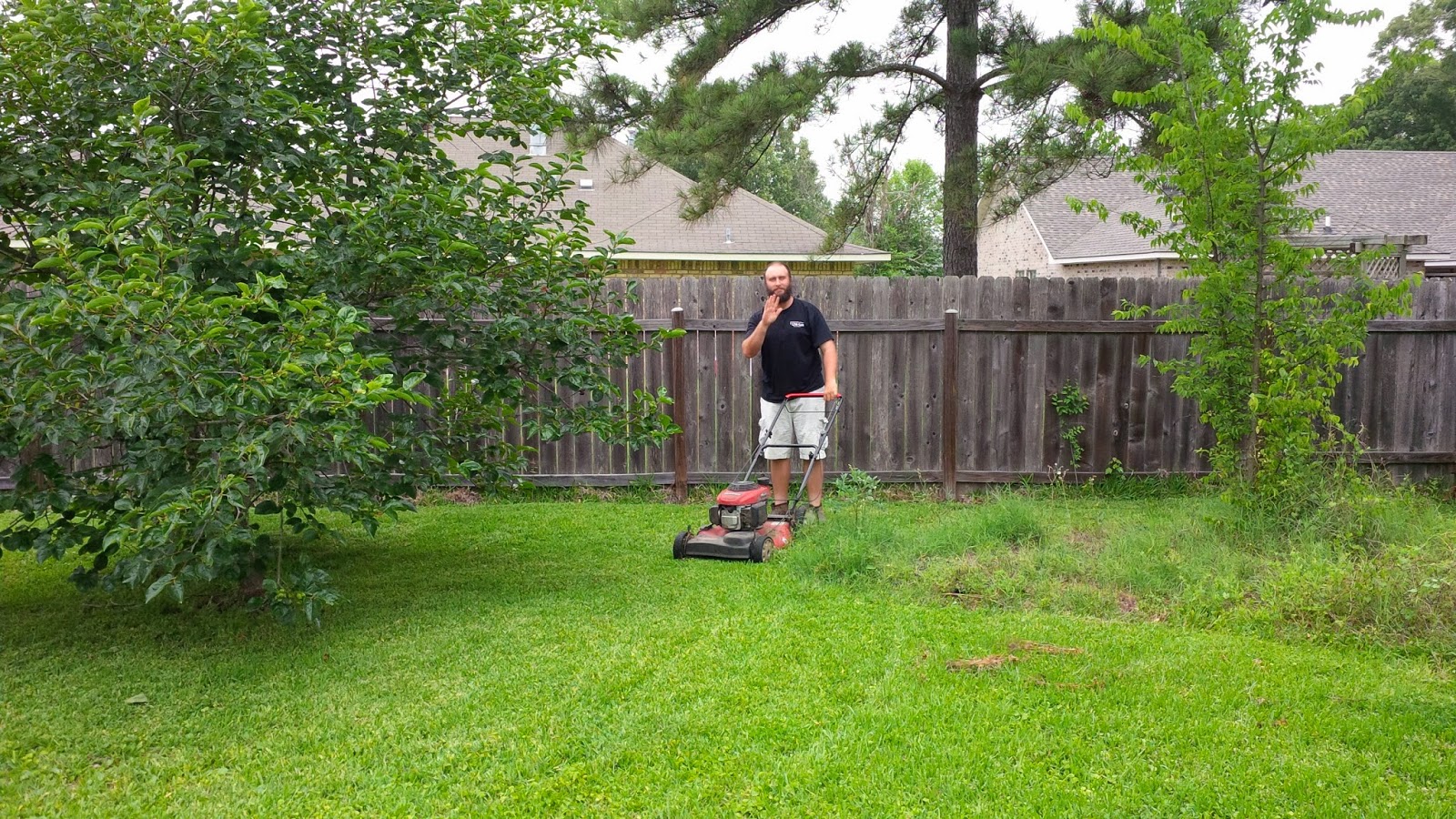 My oldest son, John is pictured cutting the grass and the future garden area is in the right side of the picture. This is what it has looked like for a while now; one of the ugly parts of the yard which needs improvement.

My youngest son, Patrick is here helping me to clear the area and my hubby, John and myself went to the store for a few supplies.   We are probably going to get a load of dirt brought in soon. 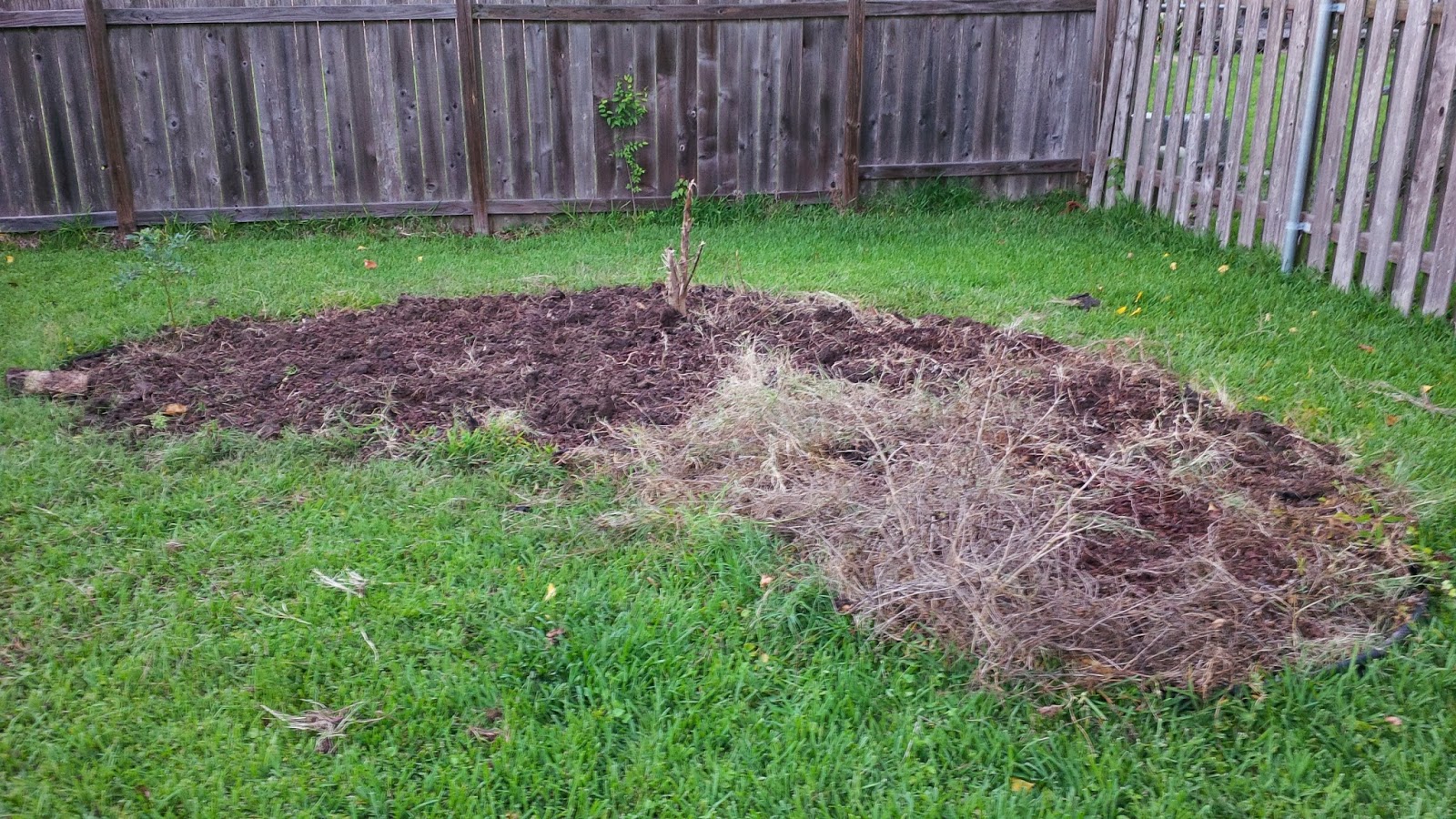 So, that area has been cleared of the pond works, small trees, shrubs and large decorative pieces of rock and such several years ago.   We have tried to grow several things there such as watermelons and blueberry bushes, but only one blueberry bush survived.   It is still planted in this area and had blueberries a few days ago.   We tried to grow another persimmon tree but it died there too.

My youngest also cleared out the stubborn stump which was on one side in the former pond works area and removed the rest of the dead weeds. There was that awful black fabric which needed to be pulled up and which is supposed to prevent weeds from growing.....yeah right!   Give me a break!    I had loosened up the soil a few inches down with a digging fork which is basically a big shovel, except this has four huge tines (not a pitchfork...that is for hay).


We put some weed killer down to get rid of a lot of unwanted vegetation and still have to work on that small tree which keeps growing back. 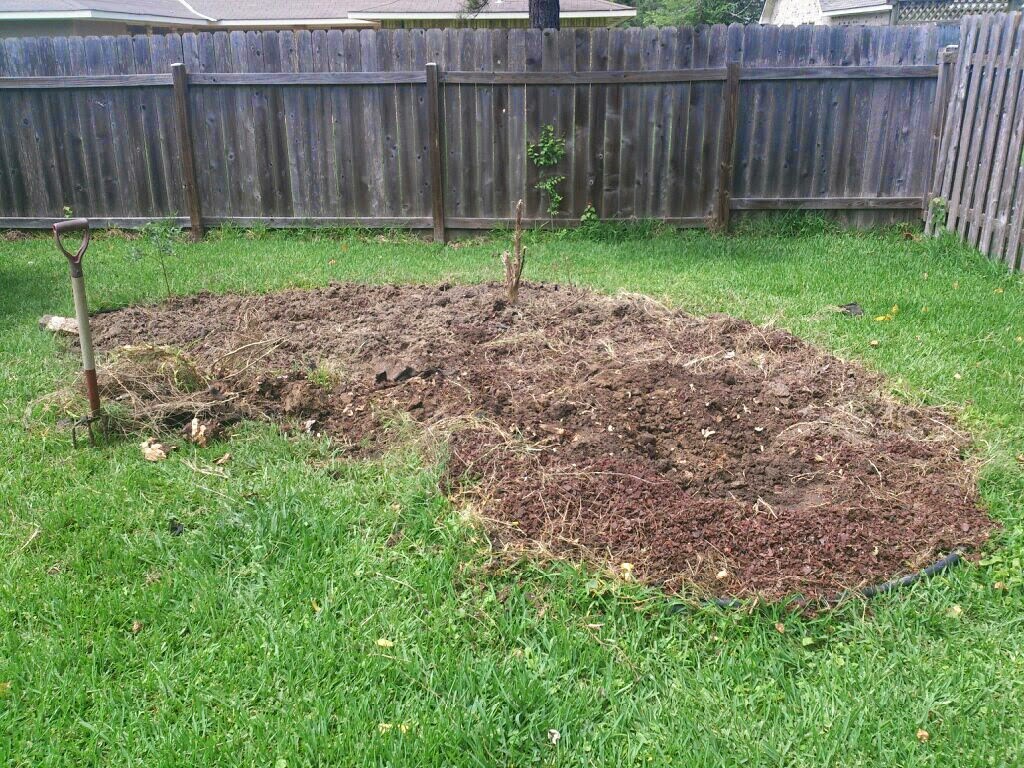 Today, Patrick and I rolled up our sleeves, measured, marked, measured again (remember the "measure twice, cut once" rule).  We prepared lumber for one 4' x 4' garden using an 8-foot 4" x 4" length for the posts as part of the inside of one the gardens at the corners, and six 8-foot 2" x 6" lengths for the wood around the sides. 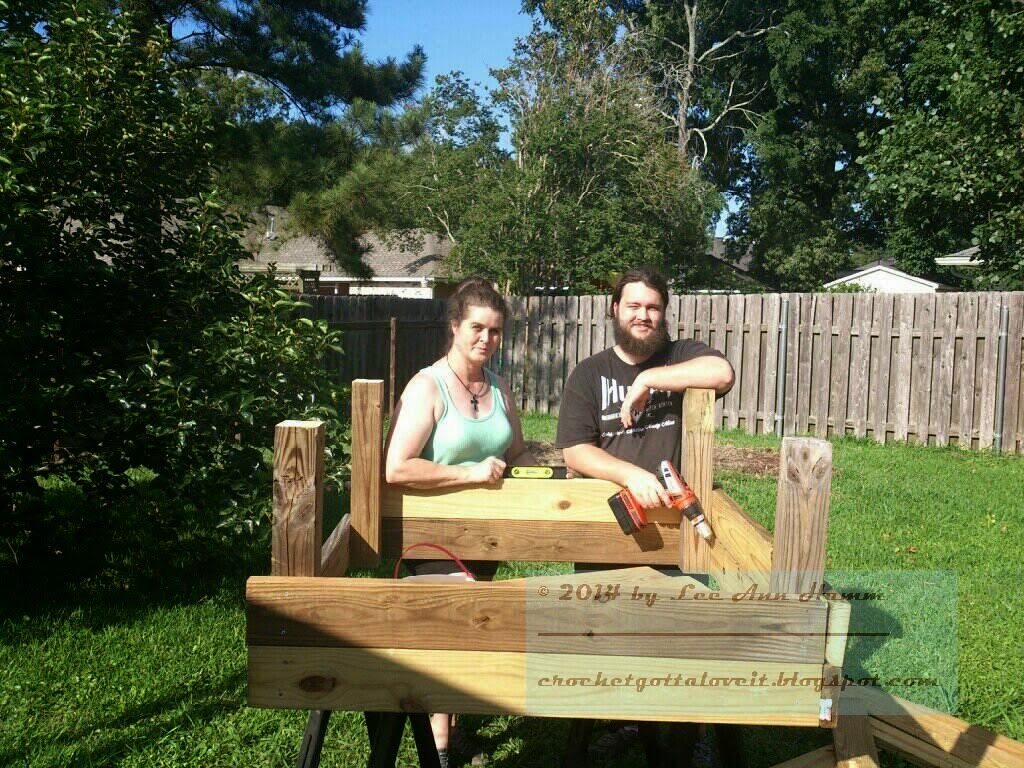 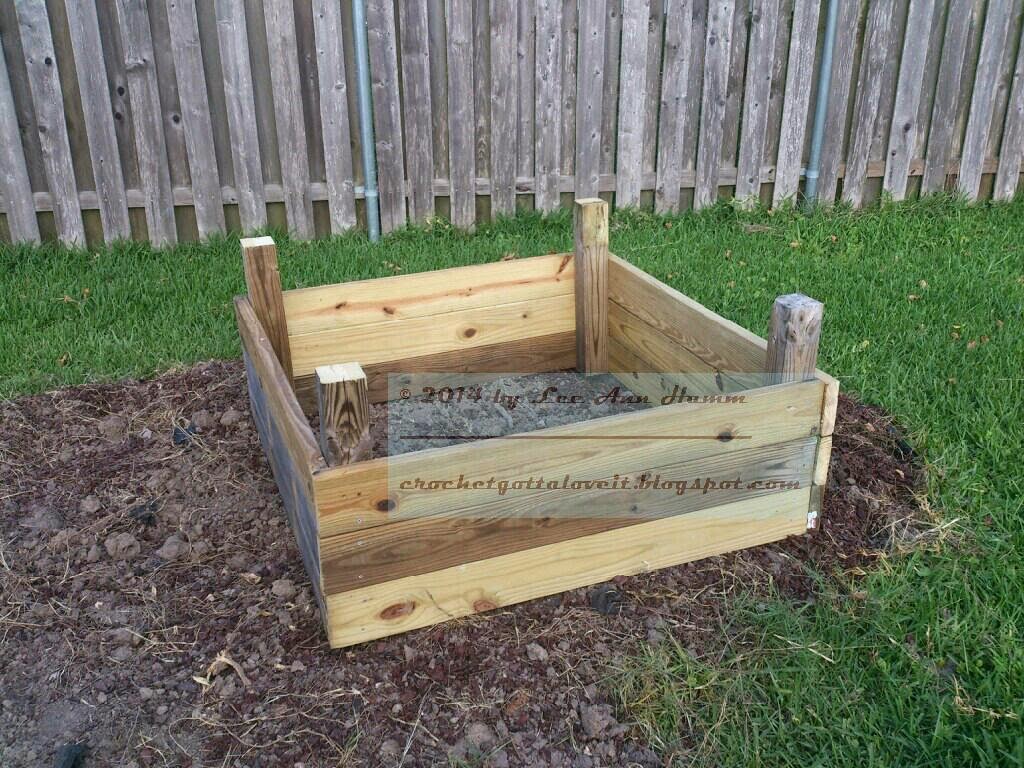 We hustled and got one garden completed.   I think this will look a lot better and it dresses up that corner of the yard.  We intend to line the insides of the "sides" of the garden with some plastic to stave off wood rotting from the garden.

And we are going to place newspapers (about 5 layers) on the bottom of the garden to prevent unwanted grass growth, weeds, etcetera.  I never want to use that horrible black plastic-like fabric again!   Yuck!

You can see the blueberry bush in the front of the photo below and the persistent annoying small tree which keeps wanting to sprout up. 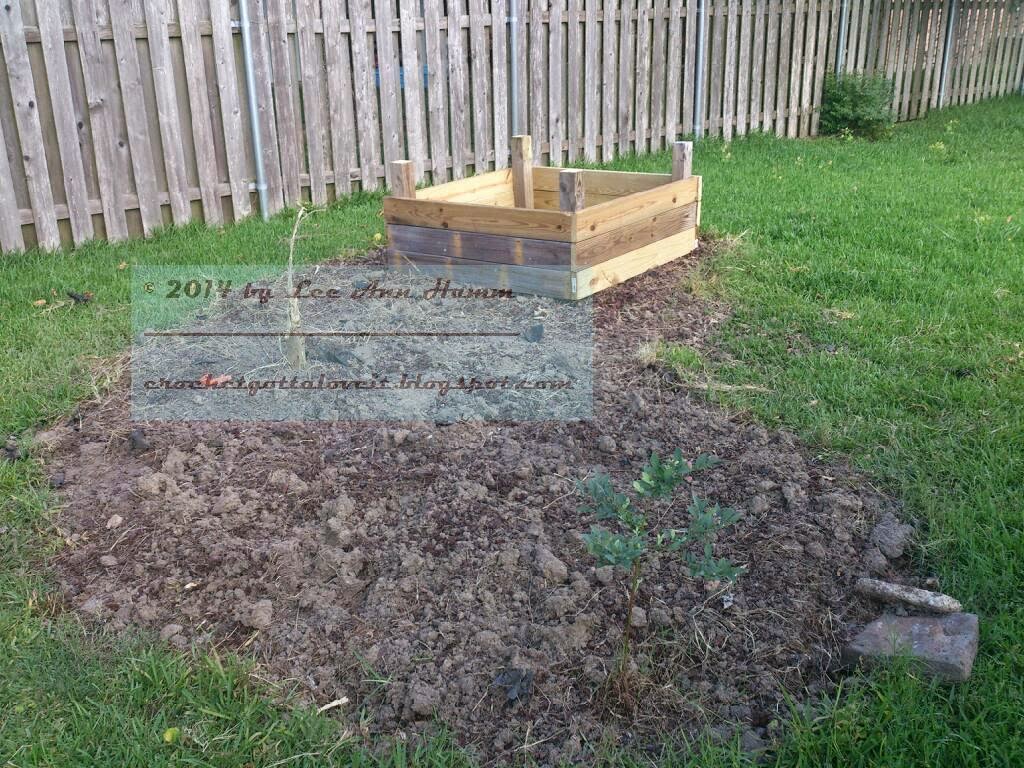 We decided to recycle some lumber for this project instead of buying new wood.  My youngest son had built a skateboard half-pipe a few years ago and it was starting to fall into a state of disrepair with some rotting boards.


I finished taking apart the rest of the boards you see here after work this afternoon.

The wood is stacked up for the next couple of gardens, plus the wood which I have leaning against the shed.  Next step is to measure, mark, cut and put these together.


He has been wanting to take the half-pipe apart and toss it but we got the idea to use the lumber from this for these garden beds.  We removed the screws from the half-pipe and we are re-using these as well.  So far, the only cost is for the load of garden soil which we will have delivered from a local nursery.

Oh, and that cordless power drill is a God-send!   I love those rechargeable power tools with the separate detachable battery packs!

Please leave a comment; I'd love to hear from you! :)